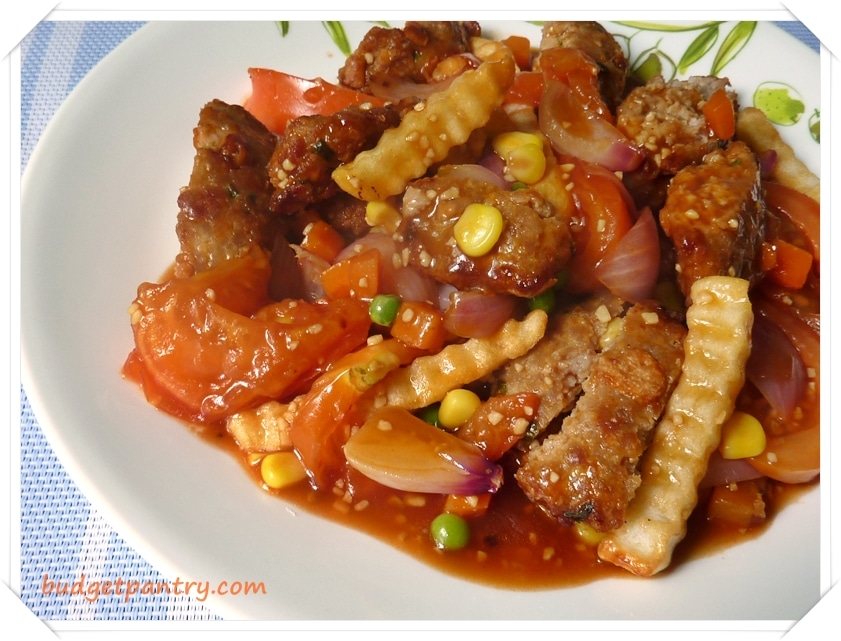 I love Hainanese Pork Chop and haven’t had a good one since forever. I remember having this at OG restaurant when I was a little girl where they served Chinese and Indonesian set meals in stainless steel trays at $6.90 per set. Ah-mm and 88 loved bringing us to OG.. those weekend outings were one of my best childhood memories!

The meat section of my refrigerator is kinda bare this week but I was determined to cook. I was also determined to cook something which hasn’t been posted on the blog. And so.. I determinedly went poking my nose into the refrigerator (literally) and spied Ah-mm’s tray of minced meat in the freezer. Hahaha.. that meat is now mine to do whatever I want with it! It is going into her tummy anyway!

While I was spying on the minced meat, I also saw some lonely french fries sitting in the freezer screaming to be airfried. There were also tomatoes in the vegetable chiller. I also had some frozen vegetables and of course there was onion. I had an idea in my head.. HAINANESE PORK CHOPS! Only those were minced meat, not pork loin, so HAINANESE MEAT PATTY PORK “CHOPS” it’s gonna be!

My mom, who is Hainanese, told me that Hainanese Pork Chops came about as an invention by Hainanese chefs working for British families in early Singapore. Because they were working for British families, they were exposed to various foreign sauces like Worcestershire sauce which is not usually used in Chinese cooking. This dish was eventually adapted to include tomato ketchup to suit local taste buds.

In other news, just look at how crispy the pork patties came out. No oil, no mess- that’s the Philips Airfryer for you! Remember to check out my other airfryer recipes by clicking “Airfryer (Philips Airfryer)” under the category list on my right sidebar. You’ll be amazed at what an airfryer can do :) If you’re thinking of getting one though, I’d recommend the Airfryer XL which can cook 50% more food than my old model. I don’t think I will be getting my hands on one unless prices really drop.. this older model is super enough for me although I *do* wish it can cook more at a go :)

For this dish, you could of course use pork shoulder butt or tenderised pork loin instead of minced meat. Serve with lots of rice! 2. Airfry at 180 degrees for 10 minutes, then flip it over and airfry for another 5 minutes. You can line the net with foil or use the baking tray/grill pan. 3. In the meantime, airfry french fries for 15 minutes til crispy. When the meat patties have cooled, cut into strips using a pair of scissors. 4. In a heated pan, add olive oil and fry onion and garlic til fragrant. Add in tomatoes, frozen vegetables and sauce ingredients. Cook for 2 minutes then thicken just a little with the cornflour solution. Add in the airfried pork and french fries. Give it a quick stir to combine and dish up immediately. Serve with rice. How much I spent (ok technically I didn’t spend anything cos these were “stolen goods” LOL but if you were to cook it):
$3.20 for minced pork
$0.30 for tomato
$0.20 for onion
$0.30 for crushed crackers
Everything else from my pantry


And there you have it! Hainanese Pork Chops! This pork in this dish is traditionally deep fried, so the airfryer really comes in handy here! No oily stove and no additional fat. If you don’t have an airfryer, you can pan fry the pork patties in a little oil and maybe use hand-cut fresh potatoes instead of french fries to escape the deep frying. If using potatoes, panfry them as well in as little oil as possible.

p/s- Apart from OG, I also fondly remember having this dish at Wishbone Restaurant, Bukit Timah Plaza, almost 20 years ago. Ah-mm and 88 would bring us to do grocery shopping at NTUC and we would sometimes dine at Wishbone when it was 88’s payday? LOL. Sadly, the standard of food there is no longer as before. I was 10. I am now 32. All the good chefs had probably retired.