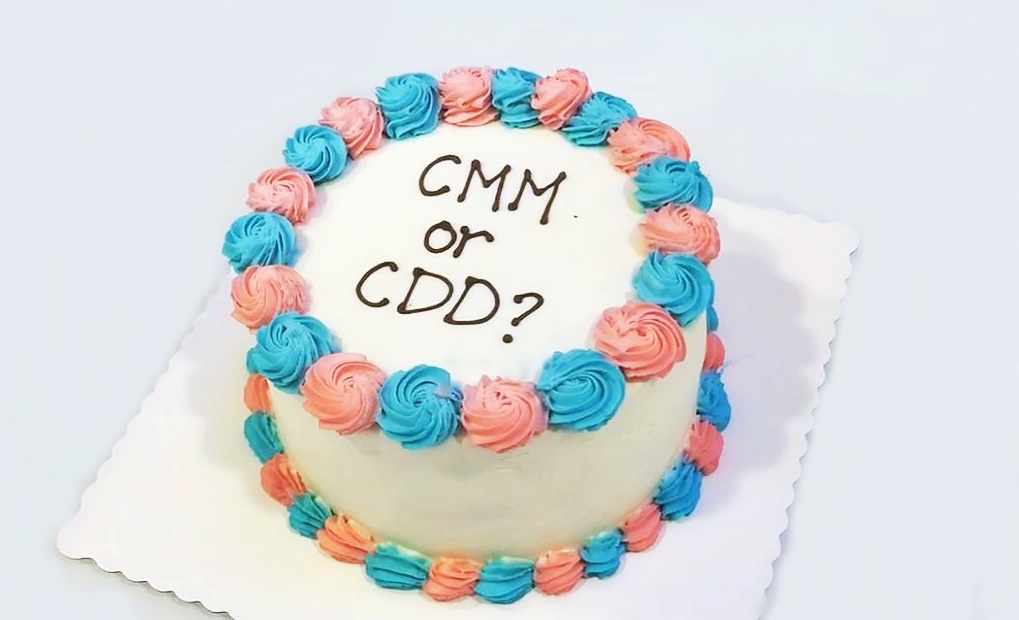 By now, cbb had announced to all her teachers that ‘MUMMY TUMMY INSIDE HAVE BABY!!’ And that she knows the gender even though none of us had a clue at that time. LOL!

It was also during this time that a mummy friend told me about other gender prediction tests which actually have some degree of ‘scientificness’ based on first trimester ultrasounds. The Ramzi Theory gauges the gender based on initial position of placenta, and works best when you use scans around week 7/8. The Nub Theory is another test which looks at the angle of the ‘nub’ to tell you if you’re having a boy or girl. During the early weeks of pregnancy, from 11 to 13 weeks, babies are known to have a nub called genital tubercle between their legs. It is otherwise referred to as the ‘angle of the dangle’, which indicates if it is a girl or a boy.

The Skull Theory examines the structure of the baby’s skull during weeks 12-14 to make an educated guess on his/her gender. It is believed to be 92% accurate. Boys are thought to have a larger, blockier forehead, while girls’ foreheads appear rounder. There are more attributes that are different in boys and girls – see this website to know more.

I went for my first trimester ultrasound scan at 12W4D. This scan was to check for the measurement of nuchal thickness (fluid behind the baby’s neck) and presence of nasal bone, as well as the development of other structures like the head, abdomen, limbs etc. We did the scan at Mount Elizabeth Novena Prenatal Diagnostic Centre – what a terrible experience! There were only two sonographers on duty in a room full of people, and each scan takes at least 20 minutes, more if the baby wasn’t cooperative. We waited from 10.30am to 12pm in a small room with other parents who had also waited a long time.

Finally, as soon as I asked Jason to grab me some food from Starbucks (I was really starving), the sonographer called my name. Cmm/cdd was bouncing away in my tummy! Must have been hungry too lol. The sonographer showed us her/his cute little hands and feet, round head and chubby tummy. Cmm/cdd was 6cm long now, and we saw the bright white line of the nasal bone staring right back at us from the ultrasound screen. I kept looking at for the nuchal thickness – it was 1.6mm, it sounds right! What a relief! We were still waiting for the results of my harmony test that I took 1 week + ago at about 11 weeks pregnant. It was an agonising wait – not so much of the gender but of the chromosomal tests.  I did the test on a Saturday at my gynae’s clinic, and results were supposed to be back in around 1.5 weeks.

After what seemed like forever, I called the clinic on the 12th calendar day.

Clinic: ‘The results are not back yet … we will call the lab to see if we can trace ok? We will definitely call you regardless of the results.‘

Half an hour later, my phone rang with ‘No caller ID …’

Man on the phone: ‘Hi Chris, this is Doctor Lee. The lab just faxed us the results. I decided to call you personally because I know you’re very nervous.’

Me: ‘Omg doc! You call me personally I even more nervous lor!’
Him: ‘Aiya! Don’t be la! The result is super low risk for all the chromosomal abnormalities.’

OMG! What a relief!! Seriously I can eat and sleep already!! Did you guess right? Cbb is having a baby brother!! I have to admit that we had a tiny bit of gender disappointment! Both of us had thought we were having another girl as her fetal heart rate was high, my nose didn’t grow big (HAHA) and we even had a girl’s name picked out! And we believe that girls will grow up being closer to each other. But at the end of the day, it doesn’t really matter as long as cdd is well and healthy. All the better maybe, since cbb will always and forever be our only daughter :)

Cute comparison of cbb and cdd during their 12th week scans: Pregnancy #2: I saw an empty gestational sac on my first scan
Pregnancy #2: A flickering heartbeat at my 6W5D ultrasound scan

Next up: Details of the 20th week anomaly scan!