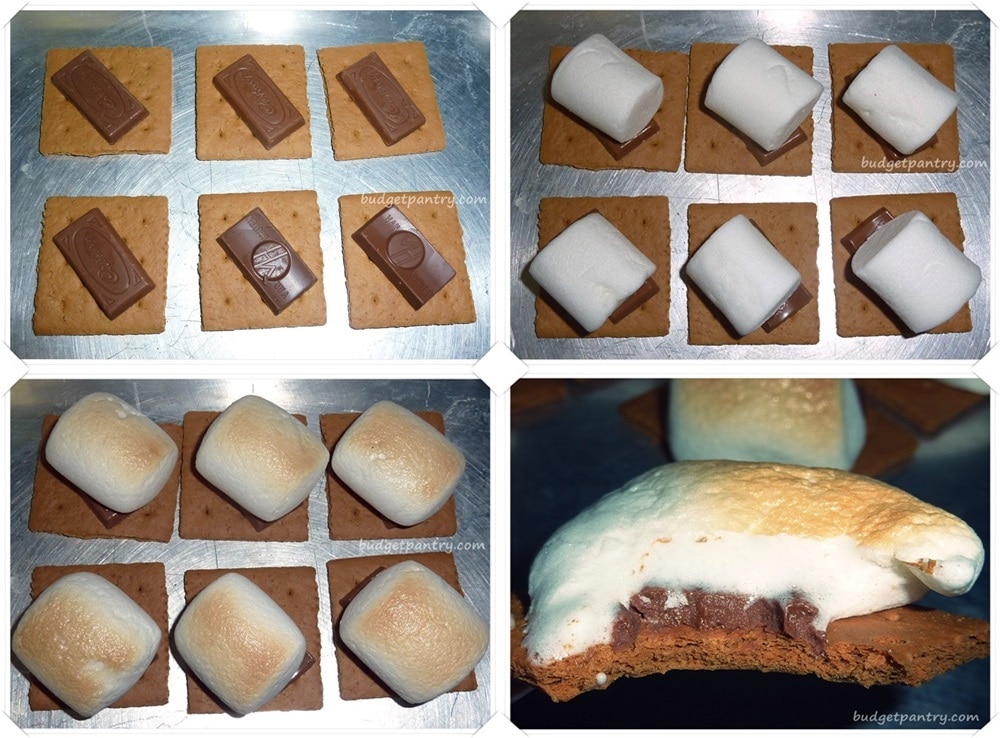 We’re probably not too familiar with S’mores this part of the world but chocolate, biscuits and marshmallows, we know right? :) Popular in the US and Canada, a S’more is a traditional campfire treat of roasted marshmallows and chocolate, sandwiched between two graham crackers. Nowadays though, there are so many variations of S’mores.. we have cupcake S’mores, S’mores fudge bars, S’mores pie, S’mores with bananas and strawberries, S’mores cookie bars, even S’mores pizza! I’m getting all dizzy with the kaleidoscope of S’more recipes on Pinterest. According to Wikipedia, the name “S’mores” came about when the children kept asking for “somemore” of the fun treats. Cute trivia!

Of course, I don’t have access to campfires as and when I wish.. so I thought I was being very clever when I tried to use a lighter flame to melt the marshmallows. The original idea was to simply place the chocolate piece on the graham cracker, then top it with toasted marshmallow. The heat from the marshmallow would melt the chocolate.

THIS WILL NOT WORK.

There is no way you can melt the marshmallow using the freakin’ lighter flame! The marshmallow will simply burn. Don’t be dumb dumb like me. You can skewer a marshmallow on a satay stick and toast it over your stove though.. but after my attempt with the lighter failed, I used my trusty oven instead!

It’s very simple, and the pics are self explanatory: The marshmallows change colour very fast.. about 1 minute in my oven at 180 degrees. Watch it and remove once they toast, then cover with another piece of graham cracker, or eat it open-faced like I did! I got the package of graham crackers from value store for $1.50: I highly recommend using Meiji chocolate.. they’re thick and rich and go so well with the marshmallows. I made S’mores a few times, with Cadbury, Van Houten and Meiji, and Meiji won the taste test hands down. Come up with your own variation if you have a sweet tooth.. I want these with banana and chocolate syrup baked into a cookie bar! Mouthwatering!!