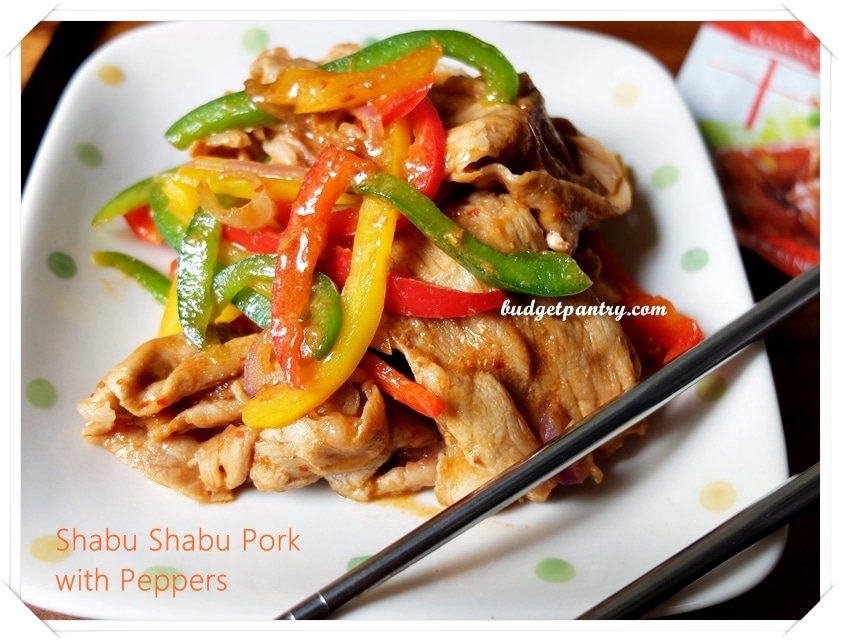 Mondays are those days that you don’t feel like cooking. This is especially the case for me since I am now working full time and still fix dinners most days. I am lucky that I knock off earlier than the rest of the population.. I really can’t imagine if I am a working mom who knocks off at 6 or 6.30, have to battle the peak-period crowd to get home, AND still have to come up with dinner for the whole family WITHOUT a helper. My respect goes to all of you working moms. You really have to tell me how you do it.

If you’re like me.. someone who usually mixes her own sauces but actually loves to cheat, you’ll love this recipe. Lee Kum Kee sent me some of their packet sauces last week. I have tried most of them before and really quite like them. I use their pork bone hotpot stock when we eat steamboat. Today, I chose to use their sauce for Tomato Garlic Prawns…..

….. to cook shabu shabu pork with bell peppers. Who say cannot? When cooking pork, I prefer to braise them til really tender, like in this Teochew Braised Pork Belly recipe. I also like to use shabu shabu pork, not just in steamboat, but in many different ways. Try my Japanese Ginger Pork recipe. I think you’ll like it too. I am not exactly good friends with pork loin because they’re very stubborn, and you know Scorpios, if you don’t want a relationship with us, then we don’t want one with you. We’re really quite easy to understand. Contact me for a tutorial. So, back to the dish. I just bought 3 bell peppers from Giant over the weekend, and used up all of them in this dish. I also got 2 trays of 250g shabu shabu pork for $9.90, which is a very good deal, considering they’re pretty good quality and not dead frozen. The entire preparation + cooking process took me ten minutes? Five minutes to wash and slice the bell peppers an another five minutes to cook. It doesn’t really get any easier than this. AND the best part? The sauce is actually really yummy and delicious with rice. I know some of you underwent resistance training before and are very old school.. everything have to mix yourself if not the dish feels tainted with convenience. What I gotta say is, I can’t change your principles and don’t intend to, but in ten minutes I get my dinner.

Steps:
1. Heat up your frying pan and add the olive oil. On high flame, add the onions and bell peppers and fry for 2-3 minutes. Remove from pan.
2. Add the pork slices one by one (so they don’t clump) and cook til 90% done (most of the meat is no longer pink). Add the sauce and mix well to coat. Return the veggies to pan, give it a quick stir fry and dish up. Serve with rice or mix in with noodles.