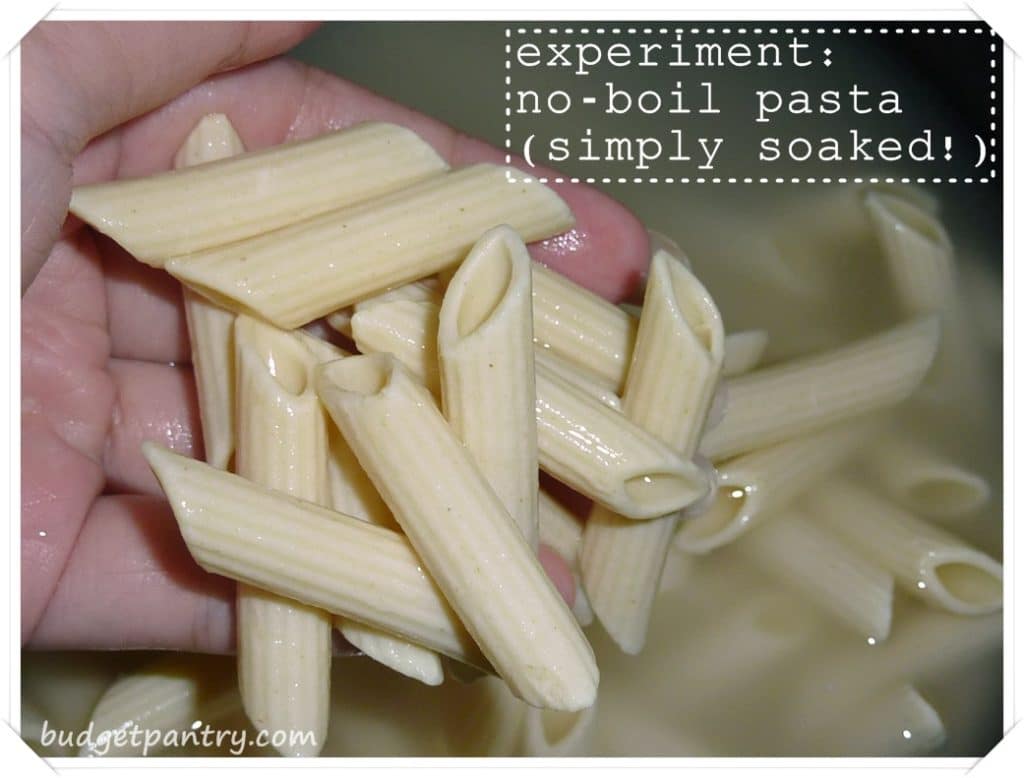 I know what you’re thinking: Is it even possible? Will I break my teeth?

After reading “A new way to cook pasta?” on The Food Lab (I failed science in school so it is always good to have someone explain the technical things to me), my mind was intrigued with cooking pasta at a simmer in a low volume of water. Cooking pasta without the water mad-boiling, imagine that.

I went one step further and googled “soaking pasta instead of boiling” and came across this article from Ideas in Food about a 1-minute pasta. Think of the time and gas I could save! I was positively fascinated and just had to try it out myself.

Well technically, their method is not exactly “no-boil” and you’ll still have to boil your pasta for a minute towards the end of the process. Here’s the idea:

1. Place the raw/ dried pasta in a bag or pot of cold water and soak for 1.5 hours.
2. After 1.5 hours, add the pasta to a pot of salted, boiling water and cook for 1 minute to get “perfectly cooked al dente pasta”.

I used penne and a pot of cold water for the soaking process. After 1.5 hours, the pasta became pale, soft, and even broke easily: I didnt like the texture already, but it surprised me that the pasta could get so soft and edible just sitting in regular water for an hour. They looked fine at this stage, but my fingers could already feel the sickeningly sticky starch coating, and I figured there was no way I was going to boil them for a minute without them disintegrating into something disgusting. And so I boiled them instead for 30 seconds in furiously boiling water and this was what I got: Doesn’t look too good right? There’s something wrong with the pasta. They’re not bouncy! HOW CAN! I wanted to cook an al dente penne pesto with tuna and brocolli. The overwhelming starch from the pasta even caused the pesto and tuna to look like they were both having a bad day. Look at the individual penne. Cannot see clearly? Come I show you close up: They were all gooey and “nua” and were in no way al dente. But you do see how this could save our lives when 1) earth runs out of energy,  or 2) when the stove goes *kaput*, or 3) when you forgot to pay the utilities bill, on a day that you’re incidentally veryyyy hungry, right? Just soak longer and you don’t even need to boil them!

The experiment worked, but I’m not impressed. It did not give me “perfectly cooked al dente pasta” but soft and mushy pasta which is technically edible, but not nice to eat. And I’m not sure if I like waiting 1.5 hours before eating, even though it took 30 seconds on the stove.

If you’re still going to try this, let me know if you get a different result!